The Faroe Islands (all 18 of them) are located at 62 degrees north, in the North Atlantic – in the middle of the Gulf Stream and halfway between Scotland and Iceland. They are self governing within the Kingdom of Denmark. The hospitable human population is less than 50,000 and the sheep population at a woolly estimate, is more than double that. The climate is described as ‘maritime’ – very changeable, as in a four seasons in one day type of place.

So after a trip to The Travelwallet to see Maggie (who was totally unphased by having to arrange a slightly unusual destination), off I went on my solo adventure armed with guide book, map, walking boots, wet weather gear and camera gear.

A quick (!) drive up the M6 and beyond got me to Edinburgh Airport where a direct flight takes less than 90 minutes. We landed in the Faroes in heavy horizonital sleet which was considerately relentless while I tried to locate my hire car. There are covered walkways in the airport car park (mmm…perhaps to break the tourists in gently to that maritime climate) but you have to leave them sooner or later for the last dash to where you think your car is…which of course, is always a bit farther away when it’s pelting down.

My first two night’s accommodation was only a 10 minute drive from the airport (well, it would have been in good weather and if I’d known exactly where I was going); a warm and cosy (and dry) guesthouse right on the edge of a fjord, next to the village harbour. By the time I’d found my room, it was early evening. Then the sun came out so I took advantage of the long days andn went out to explore for a couple of hours.

My first full day saw more exploring before I caught the ferry to an island with a permanent population of eight humans, a pair of geese, a handful of goslings and huge populations of gannets, guillemotts, kittiwakes, (eek) puffins and of course, sheep. I was in a small party on a guided trekking tour – easy by Faroese standards (they are a hardy, fit bunch) but challenging vertical trekking for those of us with short legs! All the huffin’ and puffin’ (eek…puffins!) was worth it though as blessed by fantastic weather, the scenery and views were gobsmackingly awesome. The birdlife was wonderful with a special mention for the (eek) puffins who kindly came in from the sea to their burrows against a cacophony of camera shutters being pressed. Knackered but happy had me sound asleep by 9pm! 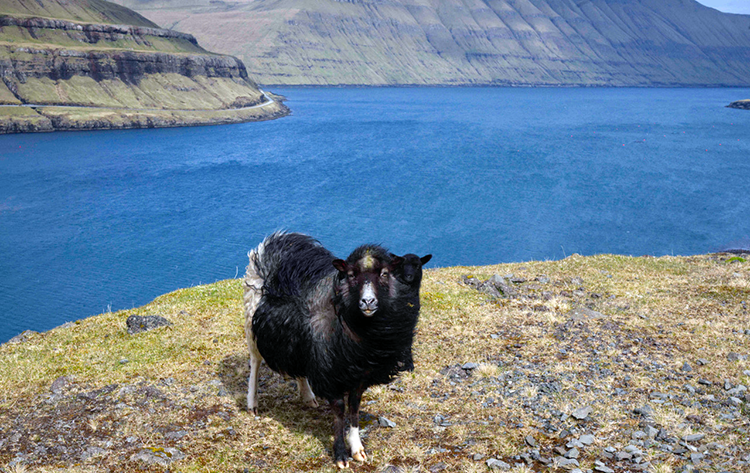 After a solid nine hours slumber and pleasantly surprised at not a hint of an ache, I embarked on another trek to see a lake on top of a cliff; bumping into a number of people who I’d met the day before – a theme continued throughout the week. After the trek, I took off in search of my next accommodation; testing the roads and mountain and sea tunnels that connect some of the islands. It was easy driving – if you didn’t take too much notice of the sheer drops or started to think about being under a mountain or the sea!!!

Unsurprisingly, there is not much traffic on the roads…that is, until you get into a one lane mountain tunnel. Then half the population is coming in the opposite direction, leaving you to wonder why the light at the end of the tunnel never seems to get any nearer whilst really, really trying not to think about being under a mountain! When you do reach daylight, the world is full of snow-capped mountains, fjords, craggy inlets, stone houses with turf roofs, picturesque churches, more waterfalls than you can point a camera at and…sheep! It’s a good job the days are long because you can’t help pulling over every two minutes to take a photo of yet another gobsmackingly awesome view. And the air is fresh – indescribably fresh – with just the odd hint of sheep now and again! And just when you think the air couldn’t get any fresher, the northern most islands are fresher still. Absolutely wonderful!

More trekking the following day, along a mountain coastal path from a wonderfully picturesque, turf roofed village to the next village around the mountain. I was the only person in the world…until I got halfway round this path when I met someone coming in the opposite direction. Let me tell you, I’d just spent a very careful hour navigating this path – daring not to look down at the sheer drop into the North Atlantic and daring not to look up in case I missed my footing and ended up down the aforementioned sheer drop into the North Atlantic. In some places, I swear the path was only a foot wide – as in only one boot’s width! Anyway, careful manoeuvering at an exceptionally convenient passing place negated the need to fall into the North Atlantic. Before they built their own church, villagers used to use this path every Sunday to go to church in the neighbouring village. It was also used as a ‘coffin route’; crikey – carrying a camera bag was bad enough!

Feeling fairly pleased that I didn’t die the day before, I thought I’d give my short legs a rest and just go for a saunter around another coastal path on the Tuesday. Yeah, right…I’d already forgotten that Faroese ‘easy’ translates into English ‘bloody hell’! Steep! This path around and up the mountain was so steep, I swear I was trekking upside down at one point! I didn’t get all the way to the top of the mountain as when the grass was literally six inches from my nose, I thought it wise to begin my descent; a very careful and slow descent as the North Atlantic beckoned several hundred feet below. I found a flat rock to perch on halfway down and spent the best part of two hours just sitting in gobsmackingly awesome scenery and listening to nature…no man-made sounds whatsoever.

The day after that, I fleetingly toyed with the idea of trekking up the highest mountain on the Faroes but having not died the previous two days, didn’t want to push my luck too much. Instead I embarked on a road trip, following a mountain route (more sheer drops) to a village that is home to one of the most windswept football pitches on the planet. I didn’t loiter too long seeing as I wasn’t anchored down and so in danger of being blown into the North Atlantic. From there to one of the oldest villages on the islands, snuggly situated in a circular glacial valley at the end of a fjord. As this was literally the end of the road, I did an about turn to head off to the capital city for a couple of nights.

Compared to what I’d experienced up until now, the capital was a heaving metropolis! After an (English) easy walk around the streets and harbour and a spot of souvenier hunting, I escaped the next day to go on the last trip of my adventure. A boat trip to some bird cliffs…big cliffs…very big cliffs. The sea was a little choppy but not too bad and while the skipper carefully navigated his way in and out of grottoes, his passengers just looked skyward in awe. It was a tad breezy on the way back to the harbour; nothing too drastic but at one point, I swear I could feel my eyelids flapping!

On my last day I managed a couple of hours lingering in the gobsmackingly awesome scenery, without having to do any death defying trekking. (Call me boring but I opted to fly rather than swim home.)

So to sum up the week I spent at 62 degrees north in three words: amazing, amazing and amazing!!! I trekked my little legs off – up mountains, down mountains, round mountains – wore my camera out, met some lovely people, soaked up some gobsmackingly awesome scenery and lived to tell the tale. If you’re thinking of somewhere just that little bit different, go…it’s amazing!

Oh and the music is by a Faroese artist called Eivor and is entitled Trollabundin (which translates as ‘spellbound’ in English). How apt!