Six Senses Zil Pasyon is located on Félicité, a private island where massive granite rocks and white sand beaches create an air of drama and beauty.

Occupying less than one third of the total land, Six Senses Zil Pasyon is the sole resort on the island. It has 30 villas and will open a spa in February which has been erected in and atop majestic rock formations. 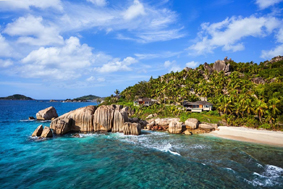 Dining and drinks at Six Senses Zil Pasyon are a relaxed ,sophisticated and memorable experiences. There is a choice of several restaurants and bars with much of the produce coming from the on-site organic garden and the surrounding islands. There are 3 restaurants and 3 bars

Cuisine of the Seychelles is a eclectic mix of the cultures that have come to her shores over past centuries. The African, the Chinese, the French, the English and the Indians all brought their own culinary staples and cooking techniques when settling in the islands. Drawing from these diverse heritages, Six Senses Zil Pasyon offers both traditional Seychellois cooking and our interpretation of island cuisine and beyond.

Considered as one of the satellite islands of La Digue as well as Grande Soeur, Petite Soeur, Coco and Marianne, Felicite offers the ultimate island hopping experience

How To Get There

The Zil Air helicopter journey to Félicité is just 30 nautical miles northeast of Seychelles International Airport (SEZ) on the country’s main island of Mahé. The 20-minute flight arrives at the resort’s own jetty helipad. Alternatively, arrive by a short boat trip from nearby La Digue and Praslin.

The Six Senses Zil Pasyon, the latest hotel to open in Seychelles, is already creating buzz. The luxury resort has been listed by the CNN Business Traveller as one of the top hot new hotels to look out for in 2017.The new resort opened in September last year .

Seychelles is a year-around destination. All seasons are great for diving and fishing while sailing and snorkeling is optimal from October to June. The spectacle of migrating birds can be seen in October while the heaviest rainfall is often from December through February.