On 23rd December last year, my husband and I, one of our sons, his wife and  their two children, Toby aged 7 and Chloe aged 5 set off to spend Christmas in Lapland.
We flew from Gatwick, although Manchester departures are available, on a British Airways dedicated charter flight, and flew to Roveniemi in Finnish Lapland. On arrival we were then taken by coach to our resort of Luosto, with a stop reroute to pick up our snow suits and boots. These items were essential. Several people, including our own grandchildren had come with their own ski gear, but everyone agreed that the equipment provided by Canterbury was far better suited to the climate we encountered. 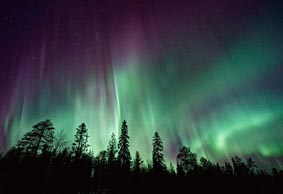 On arrival at the resort, we were driven around to help familiarise us with the location and then taken to our accommodation.  As we got off the coach, we were immediately awestruck by the sudden appearance of the northern lights, the best display since September, according to the coach driver. It was absolutely amazing, but unfortunately not a pre bookable option for the trip. Nevertheless, it remains a possibility while you are in the area. 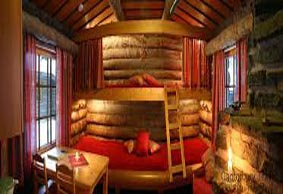 Our accommodation was a pair of semi detached log cabins, but there is a hotel on site, and superior villa/cabins, but ours was great. It wasn’t big, but plenty of space for the time we were actually in the cabin. It was beautifully warm, but also had a log burner, a drying cupboard and a sauna.    We were allocated a restaurant which was a 10-15 minute walk from the cabin which initially sounded like a long way, but each cabin had a supply of sledges. The children just loved the walk there being pulled
on the sledges. 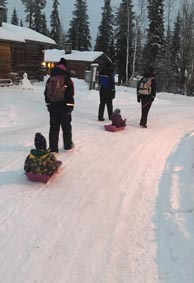 We were there for three full days, and the theme of the trip was a search for Santa and his elves.   We found the elves, or they found us, pretty quickly, but Santa took a bit longer.   The activities were great fun,
sledging, husky farm and  sled ride, reindeer farm and ride, snowmobile rides and lots of interaction with the elves. There was something to do all the time, although of course the trips were not compulsory.  The
organisation was superb, with great attention paid to family groups.

Of course, you have to participate in the singing on the coach, and join in the ooohs and aaaahs when elves appeared and disappeared, but the kids thought all of that was wonderful, and they were completely entranced by the whole experience, and we were entranced by their joy.

The food was buffet style for all meals, and certainly was not gourmet standard, but it was really aimed at the children and was satisfactory. The wine which was not included in the cost was very expensive, but the
beer was not much more than at home.There were additional trips which could be purchased, such as a snowmobile tour, which we did, and was super, but there was no need to buy anything extra, as the days were pretty well filled, and most people spent any free time on the sledging slopes. The only other extra we paid for was on Christmas Eve, when Mrs Claus came and knocked on our cabin door just before bedtime to ask if she could read Toby and Chloe a bedtime story. She was delightful, and the children were absolutely thrilled.  Oh how I wished to be seven again just for the day.

We were extremely lucky on our trip, firstly because we saw the northern lights, secondly because it snowed but only a little, several times, which added to the atmosphere, and thirdly because the temperature, although cold, was never extreme.   None of these things can be guaranteed, but they can certainly make a difference. Nevertheless, there is no doubt that this is the Christmas all six of us will think of as the best ever.  Thank you Travelwallet for arrange this trip