Having already travelled with Great Rail Journeys before we knew that the day to day running of the trip would be slick and the hotels superb. Maggie Rogers, from the Travel Wallet negotiated a discount for us for early booking. 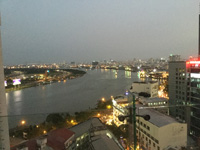 From the moment we entered Arrivals at Heathrow and met our smiley Tour Manager, Carolyn, we sensed that this would be a great adventure! Arriving in Hanoi early morning our first hotel moved mountains to get our rooms ready and after a freshen up we headed out on bicycle tuk tuks to visit the bustling Old Quarter where everyone seemed to be on motorbikes and crossing the road required you to step out, shake your hand at the traffic coming at you, make eye contact and above all NOT to stop! Every hotel was of 5* standard, the rooms had every luxury and the food was copious and tasty. 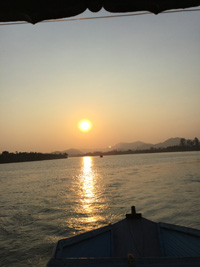 After spending the night cruising on board a luxury junk in Halong Bay, a World Heritage site where we canoed to a floating fishing village and met the people, and visited the caves in the limestone rocks. 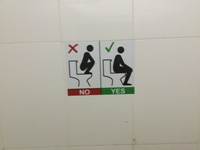 We took a soft sleeper train overnight to Hue …. after all this was a GRJ trip! …. the squat toilets took a bit of getting used to but the beds were comfortable enough!… Here, we cruised on the Perfume River and visited the Imperial City.

Our next train trip was a day journey in comfortable carriages down to Da Nang. We could see, as we headed south, how the crops were changing as

the temperatures increased … rice being planted in water gave way to lush meadows of rice to fields completely harvested. On arrival at our hotel, we were all highly amused to see Mrs Nga from the laundry opposite the hotel holding up a GRJ welcome sign … we were all happy to trot our laundry across to her for a fraction of the prices charged by the hotels and it was washed and ironed 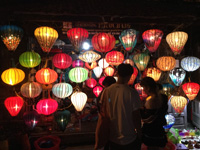 the next day…. nice bit of enterprise! We then travelled by train to Nha Trang for 2 nights by the sea and some free time.

We had local guides in Vietnam and Cambodia and the two in Cambodia were particularly good. By the time we arrived in Ho Chi Minh City it was 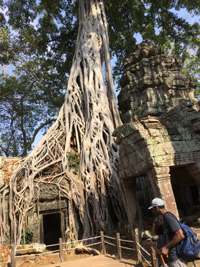 very hot indeed. This was going to be one of the highlights of the trip for me … a visit to the Cu Chi tunnels, the vast underground complex used by the Viet Cong in the war against the US, and it didn’t disappoint! We walked in the jungle to the various places where traps had been set for unwary soldiers and we all climbed down into the tunnels where we had to walk on all fours in the stifling heat …. amazing!

After a day on the Mekong river in a speedboat heading up into Cambodia, where we left the busy bustle of river life in Vietnam for the quietness of the riverbank in Cambodia, where we saw children playing in the water and women washing clothes, we arrived in Phnom Penh. Our guide, Lim, was a fascinating storyteller who had been made to work in the fields at the age of 4 by the Khmer Rouge … he had been tortured, many members of  his family killed and his brother maimed by a landmine during that awful time … he took us to the Tuol Sleng prison where many thousands of people were tortured under Pol Pot and later, at our request he took all 28 of us to the Killing Fields where these people were later murdered … no need to go into details  here, but we were all moved and inspired by his story. In fact our guides were very honest about Cambodia when out of earshot of others and we got a strong picture of a monarch who is unpopular and a country where all the money is going into the pockets of the  elite. 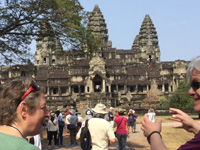 For our last full day we were given a motorbike tuk tuk for two and we headed into Angkor Wat and Angkor Thom to see the city in the jungle – it did not disappoint and in particular the afternoon visit to the part that was being left to the jungle was amazing (Indiana Jones was filmed there!)

This  is only a brief synopses of what we saw and did, but I hope that it gives a flavour of what was an amazing experience in two contrastingly different countries. The record for how many people they could get on a motorbike was 5 and we even saw someone carrying a grand piano on the side of his bike……… a great holiday for those with an open mind and a bit of stamina