1 There is more to the Algarve than beaches and bars try the “New Hidden Algarve “ Holidays . You stay on farm house estates set in olive groves near walking trails for £691 pp including flights and car hire 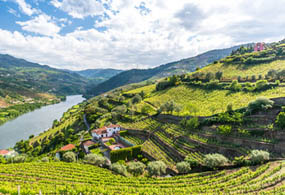 2 New flights added with Monarch Birmingham or Manchester to Porto

5 Lisbon is a fantastic city break  with lots to see and do. A trip to the 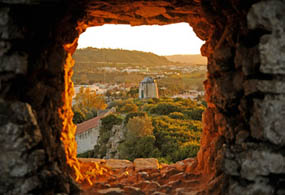 capital should take in the Torre de Belém, a UNESCO world heritage site and one of Portugal’s most famous monuments. The Gothic tower was built to guard the entrance to the harbour and has some fine examples of Portuguese stonework dating from the 1500.

Portugal’s first king, Afonso Henriques, laid the foundation stone for the first church of St Vincent ‘Outside’ – that is, beyond the then city walls – hardly a month after taking Lisbon from the Moors in 1147. He was fulfilling a vow to construct Christian houses of worship on the sites where Portuguese soldiers and northern European crusaders lay buried. The big draw are the cloisters, richly decorated with early 18th-century tile panels, some illustrating La Fontaine fables. Inside there’s the royal pantheon of the Braganza family, the last dynasty to rule Portugal. The figure of a weeping woman kneels before the twin tombs of Dom Carlos I and Crown Prince Luís Filipe, shot by assassins in 1908. 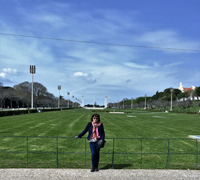 My husband usually takes me away for a City break in March to celebrate my birthday. This year two of our daughters were running a half marathon in Lisbon so we decided to go there. I had spent an afternoon there before at the end of a tour of the Alentejo region of Portugal, that is another one to tell.

Lisbon known as the city on 7 hills, it is actually a very large city as it is spread across a series of hills. We stayed in the Intercontinental hotel which was very nice, slightly out of the centre but overlooking Parque Eduardo VII park which is a lovely green area in the centre of the City and about 10-15mins stroll down to a busier part of the City.  On arrival in any City we will look for the hop on hop off bus options as a good way of orienting ourselves with the destination.

There are lots of options in Lisbon, bus or bus and tram or even bus, tram and boat. There are several routes to go on too depending on what is of interest to you. We actually went out to the furthest point on our 1st bus trip which made us realise how large the city is.

Go the Baixa for great food and lots of bars and atmosphere at night, definitely the most buzzy place we thought.

Tram 28, this is Lisbon’s most famous tram route, grinding back through the Baixa and up towards the Caste through the Alfama. Very busy so get there as soon as you can so you are at the front of the queue.  Catching trams in the high season I think would be difficult as they are only small and lots of people are trying to get on them. I would suggest going to the starting point and get on and stay on as half way round they will just not let people on if they are too full.

Castelo De Sao Jorge, this is the ruined Moorish castle that Tram 28t takes you to. It is a steep walk if you decide to get there on foot, the open top buses do come pretty close by though. You could spend several hour wandering around here and great views down to the City.

Torre de Belem, climb the elaborate sixteenth century tower, it is a symbol of the city.

Walk in the Alfama, a maze of steps and tortuous alleys where life continues much as it has for many years.

A city full of Museums and Galleries 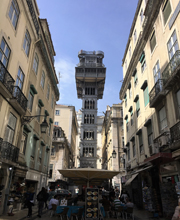 We went on the  Elavador De Santa Justa, this is the strangest thing where it is located, quite eccentric. It was built by a disciple of Eiffel, it is a giant lift that whisks you up 32m up the inside of a latticework metal tower. It deposits you on a platform high above the Baixa where you have great views of the Castelo de Sao Jorge and the city rooftops.

Marvel at the Padrao dos Descobrimentos (Monument to the Discoveries)It is right on the sea front and is 54m high, caravel shaped slab  of concrete to commemorate the 500th anniversary of Henty the Navigator. 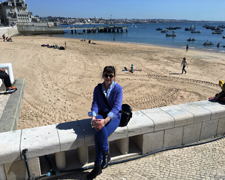 Catch the local train down to Estoril or Cascais, we spent several hours in the delightful seaside resort of Cascais. A really pretty little place and a nice change from the hustle and bustle of Lisbon. Well worth the train journey as you wind alongside the sea, very regular trains and very cheap too. We stopped at Estoril for lunch but did not really go too far from the railway.

Lisbon a really great place to go for a few days or longer, we only really scratched the surface of what you could see

The best way to get around is on the trams or cruise on the Tagus river . 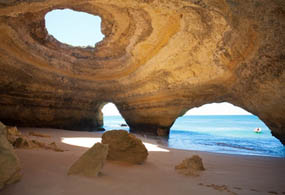 The Lisbon Coast has well sheltered beaches of the Serra de Arribida, great expanse of dunes south of the River Tagus and the popular beaches of Cascais and Estoril favoured by Lisboners. From the Douro towards Spain, on the Costa Verde, there are fine sandy beaches backed by rolling green countryside. Costa Dorada has a more rugged coastline with sandy bays at the bottom of high cliffs