We stayed in the Intercontinental Bora Bora Resort Thalasso Spa.

Bora Bora is a small South Pacific island northwest of Tahiti in French Polynesia. Surrounded by sand-fringed islets and a turquoise lagoon protected by a coral reef, it’s known for its scuba diving. 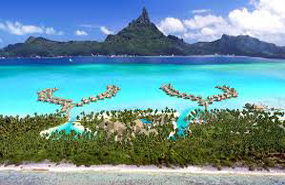 It’s also a popular luxury resort destination where some guest bungalows are perched over the water on stilts. At the islands centre rises Mt. Otemanu, a 727m dormant volcano. The accommodation was located right on the beach front and in front of famous mountain. Our accommodation was a thatched hut on stilts. One memory is the coffee table was glass with a slide back top so you could feed the fish underneath. We visited Bora Bora around 2007 after a South Seas Cruise, it was late December and the weather was around 30 degrees although overcast. 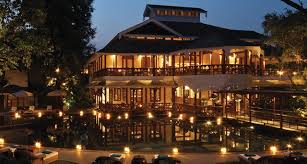 We went to Myanmar in January 2016. The first 2 nights we stayed in the Belmond Governor’s Residence Hotel, a romantic, colonial-style mansion dating from the 1920s. It is located in the elegant Embassy Quarter; Belmond Governor’s Residence conjures up a bygone era while offering every modern pleasure. We loved its fan-cooled verandas and teak armchairs and the unusal fan-shaped swimming pool. The food and staff were very nice. During our stay we visited all the temples in the City. After here we flew to Bagan in the middle of the country to pick up a cruise on a River Boat along the Mandalay River for 1 week. On the first day in Bagan we went on a Hot Air Balloon ride over the temples, an unbelievable experience .The cruise to Mandalay was nice but not loads see but very relaxing. We visited monasteries and yet more temples and the famous bridge at Mandalay. 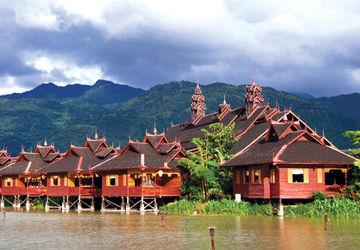 After the cruise we flew to Inle Lake and stayed in Inle Lake View Resort on the lake It is a great setting and Inle Lake is a unique environment, communities of people literally live on the lake and a fascinating experience.

Myanmar has political issues, the army are in control, and if you have army connections you live well if not you are probably poor. The

difference between haves and have nots is massive. Hopefully the new prime minister will change things step by step. This is a unique time and great opportunity to visit this country which has only recently opened its doors. 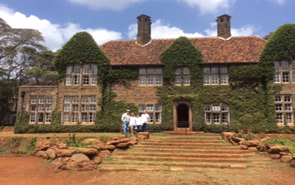 This hotel is located about 90 minutes from Nairobi airport. It looks like a house you would expect to find in Surrey. It is an exclusive boutique hotel, set in 12 acres of private land within 140 acres of indigenous forest in the Langata suburb of Nairobi. It was built in the 1930s when European visitors first flocked to East Africa to enjoy safaris. It has elegant interior, gardens, sunny terraces and courtyards.It was  like walking into the film Out of Africa and one of its twelve rooms is named after the author Karen Blixen. 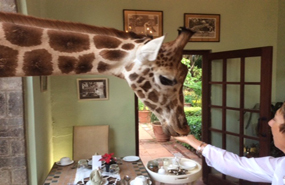 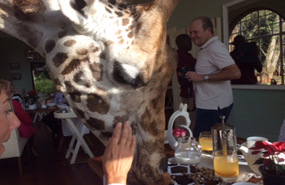 The English owners have created a unique situation whereby the Giraffe’s all approach the house at Dawn whilst the guests are having their breakfast. They actually put their head through the windows and you feed the pellets of nutritional food provided by the hotel (not your bacon and eggs). It was a memorable and surreal experience which we will never forget. We stayed for two nights which was adequate .

There is THE DAVID SHELDRICK WILDLIFE TRUST a sanctuary for orphaned baby elephants nearby. This is famous for the TV show Elephant Diaries . 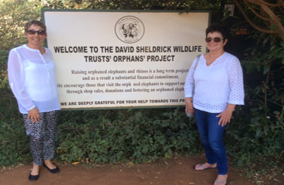 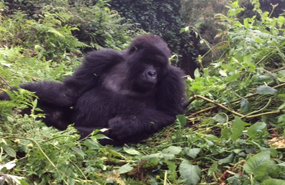 We then went on to Rwanda to see the gorillas. Surprisingly Rwanda is a very clean and tidy place the airport was immaculate. We were staying at a lodge in the mountains about two hours from the airport. All the guests eat together and there was a big lounge with an open fire. The weather in January was hot but chilly in the evenings. We were there for 3 nights. On our first day we trekked in the forest and found a group of 20 Gorillas, an amazing experience . 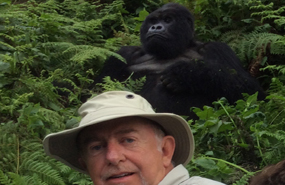 The following day we went out again this time we found a different group but out in the open .We were just sitting next to them and I could almost reach out to a silver back, you must not of course and also not give them eye contact. They pretty much ignore you as long as you behave yourself. A 3 night stay is all you need. We met some local villagers and I handed out some stationary which they really 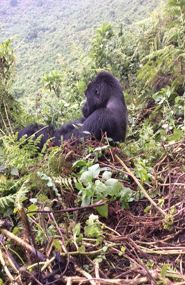 After this we flew back to Nairobi then connected to Tanzania for a week by the sea .