Floral carpets, Wall of Hope, exhibitions, floats, classic car parade, flower pavilion. .. this year the Flower Festival is taking place from 19 April to 13 May and promises some surprises! PortoBay hotels on Madeira are also associated with this great event. .. come and enjoy this experience .

Floral species originating in many parts of the world bloom in Madeira, as the island meets specific climatic conditions that allow species from both tropical and cold regions to flourish. 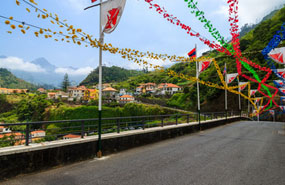 The Flower Festival is a tribute to spring, and the celebration of metamorphosis and rebirth, fertility and the abundance of the flowers that colour, perfume and inebriate the surrounding environment and that give value and take the good name of this tourist destination across borders. Find out more about what to expect from the Madeira Flower Festival, which will take place between the 19th of April and the 13th of May:

On Saturday morning the Children’s Parade takes place, in which hundreds of children, dressed for the occasion, parade to Praça do Município to build a beautiful flower mural symbolically named “Wall of Hope”.

This initiative, which has been held for over three decades, combines childhood innocence and the delicacy of flowers in a ceremony calling for peace in the world. Each child takes a flower and the ceremony usually culminates with a release of doves and a children’s show. 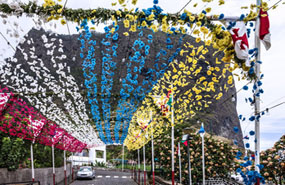 On Sunday afternoon, the streets of Funchal city centre are once again filled with music, colour and soft aromas, with the sumptuous float parade, which harmoniously combines numerous floral species with blooming decorations full of creativity. The Flower Festival Float Parade, held since 1979, is one of the most striking and eagerly anticipated events of the entire festival, for tourists and residents alike. This event is known for the magnificence and splendour of the floats and costumes of the hundreds of participants, mostly children, richly adorned with numerous, varied and magnificent floral species, parading along a planned route to the sound of festive musical themes and performing both simple and elaborate choreographies.

The Flower Festival is also a cultural event. Tradition is particularly associated with the event, whether through the performances of folk groups, or through the construction of the beautiful floral carpets. At the same time, homage is paid to flowers at the magnificent Flower Exhibition and the city is animated with music concerts and variety shows.

From Madeira Tourist Board