I have just returned from a 4 night fact finding mission in Abu Dhabi with Jetset Tours.We flew with Etihad from Manchester on a direct flight staying 4 nights at The Dusit Thani Hotel. It is centrally located in Abu Dhabi’s new business and government district. It is a 5star luxury hotel, rooms were lovely as you would expect of this hotel chain. 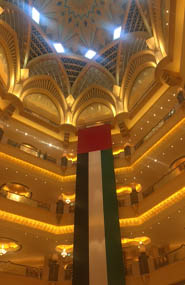 We had access to the Club Lounge where they served a small breakfast selection if you didn’t want to go to the main buffet restaurant, which had almost anything you could think of to eat for breakfast. We used the lounge in the evening where there was a selection of warm canapés and two delightful members of staff who served your drinks, with a wide selection to choose from. The hotel had a swimming pool and we had dinner in the main restaurant when we arrived and did have drinks one night in the main bar where there was quite a buzzy atmosphere. Due to its location if you wanted to go anywhere you had to use a taxi. There never seemed to be a problem getting one and they were reasonably priced too.

Abu Dhabi is quite spread out made up of different islands, Saadiyat Island is fast becoming a world class leisure hub minutes from downtown Abu Dhabi. There are some luxurious hotels and a fantastic beach although we didn’t get the opportunity to go there. 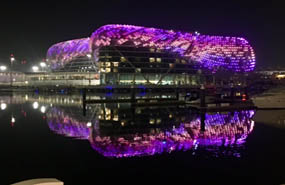 We visited Yas Island which is located just off the coast. Here you have the Yas Marina Circuit where the Grand Prix are held. We had dinner at The Yas Viceroy, which has the incredible LED canopy that changes colour which looks quite spectacular. this landmark hotel embraces the Formula 1 Circuit. You can watch the high speed races from the hotel or relax on their beach. We visited the very high tech Suite that is usually hired by a Sheikh when a big race ? is on.  We had dinner here in their buffet restaurant which offers an All Inclusive dining option, there are 7 dining options in all. One bar has race circuit views so obviously a popular place for Gran Prix fans. Also a great place for families with a 335sqm kids zone. I personally didn’t over like this hotel it was a bit too big and too plastic looking for me but I can see its attractions. 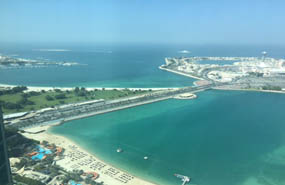 Yas Island is also the home of Ferrari World which is dedicated to all things Ferrari. It is a great day out with over 20 rides and attractions from the most advanced simulators to high speed rides. It is all under cover unless you are being whizzed around on a couple of the rides which is good for the summer months when it would be so very hot. We had a morning here but you could easily spend a whole day there. On the same day we visited Yas Waterworld, again this is somewhere you would normally spend a whole day. This is spread over 15 hectares, with over 40 rides, slides and attractions. So a huge choice for the courageous like The Bandit Bomber (the name says it all) to floating around a lazy river. You can hire towels and lockers are available. You would need good sunscreen as you are out in the open the whole time but a good fun day out. There is also a golf course on Yas but thankfully ?we didn’t go there. We did have time to go to Yas Marina for a drink after dinner at The Viceroy, it has was busy with a variety of bars in the section we went too, a real buzzy atmosphere there. 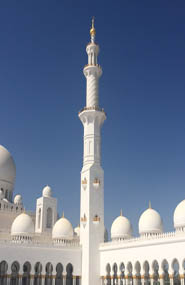 We visited the Sheik Zayed Grand Mosque, which I have to say must be the biggest and most Grand one I have been to. They kit the ladies out with an outfit that covers your arms, legs and has a hood to cover your head too (not the most attractive outfit I have worn !?) There seemed to be more tourists than worshippers but that could of been due to our visiting time.

We did an inspection of the architectural masterpiece The Emirates Palace one of the most splendid hotels in ?? The Louvre Abu Dhabi was about to open while we were there.

This is the hotel where visiting heads of state normally stay , the home of the Cappucino that has gold flakes instead of chocolate on the top !! Everything that is gold actually is gold plate, except where people can reach as they were scratching it off the walls !!!!

My least favourite hotel was The Hilton , very brown and dated and in need of refurbishment I thought. My favourite was St Regis on The Corniche super luxury in a great location. 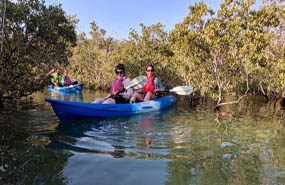 A thing I didn’t expect to do but was great fun was kayaking in the mangroves , who would of thought it in Abu Dhabi !!!!!

A destination I would go back to if I wanted to relax in luxury but things to do as well.